Love story: The trees we leave behind 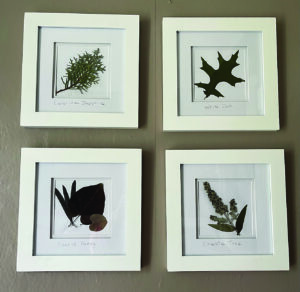 The first year they lived on the Eastern Shore, the Burgoynes planted a Forest Pansy tree, reminiscent of how the couple met. Mindie later matted and framed a specimen, inset, along with others trees from their property (Photo courtesy Mindie Burgoyne)

Mindie Burgoyne’s love affair with trees goes all the way back to her childhood.
She wrote about her deeply rooted connection in a blog post, “How to Talk to Trees” (https://travelhag.com/how-to-talk-to-trees/). Forthrightly stated, the words are helpful how to hints for the uninitiated. But between the lines, Burgoyne’s love letter shines through to these majestic and beneficial botanical companions.
The posting highlights Burgoyne’s recent dilemma over leaving beloved trees behind, and the memories associated with them, when facing an upcoming move, and the picture-perfect resolution she crafted.
The owner of Chesapeake Ghost Walks and author of the Haunted Eastern Shore book series also subscribes to life’s mystical magic, which, may explain how fate delivered future husband Dan into her life.
They met when Mindie bought a Forest Pansy tree from Dan at the garden center where he worked, unwittingly planting the seed of a happy marriage, raising six children and many more trees. (Gardening was just one of many facets to his rich background, which included ironworker, educator, fisherman, grape grower and beekeeper.)
After their nest emptied, the couple put down roots on the Eastern Shore, leaving behind the pivotal Forest Pansy and others representing the family’s unique love language.
Dan bought and planted a fresh Forest Pansy in their new yard. Other trees followed, gifts from Dan and their children to Mindy on numerous birthdays and Mother’s Days — Oak, Chaste Tree, Carolina Sapphire, Beauty Berry, just to name a few.
From April 2019 Dan underwent brain surgery, followed by a three-month hospital recuperation.
In January 2020 he was hospitalized again until March 2020.
On Sept. 18 of that year, the couple’s 21st anniversary, he was admitted a third time, returning under hospice care on Oct. 30 and passed away on Dec. 5.
After initially channeling her grief into addressing long neglected issues in the couple’s historic Marion Station home, Burgoyne made peace with moving to Cambridge. But saying goodbye to the trees posed a major challenge.
Inspired by an episode of HGTV’s Hometown, she ordered a flower press from Amazon, purchasing paper, frames, and mats from Michael’s, “not even $50 total” investment.
After some practice, Burgoyne used “really high quality” sheets to mounting the clipped leaves and seed pods.
Using double mats endowed a pleasing shadow box effect, and she was sure to inscribe each tree’s name on the mat before framing.
A framed beauty berry leaf became a gift celebrating the anniversary her children share with her and Dan, while others will adorn Burgoyne’s upcoming abode, as she plants yet another garden.