The beautiful Ostrich fern is a native fern that thrives on the Eastern Shore if it is planted in part- to-full-shade and medium-to-wet soils.
If the soil is never allowed to dry out, the plants will spread and cover the ground by underground rhizomes which are a type of root, and they can form lovely dense colonies of cool green.
The feathery fronds both arch and grow upright in a clump, reaching 2-3 feet. Each frond is made up of finely cut leaflets in a rich, medium green in color. 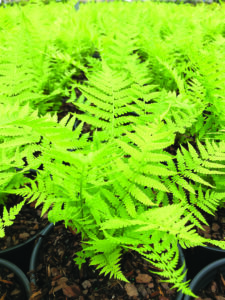 In the springtime the fronds emerge from the ground as “fiddleheads” before expanding to their full height by summer.
In the fall, the fronds begin to turn yellow then brown before the plants go dormant in the winter.
In mid- summer the plants produce fertile fronds in the center of the clumps, an erect spike-like stalk that is dark brown and lasts through the winter.
There are a lot of other native plants that also like part to full shade and moist soils and can grow with the ferns including trilliums, bloodroot, trout lilies and Dutchman’s breeches.
Nonnative hostas and astilbe will also grow in those same conditions and can provide more color and texture to the shady garden.
Best of all, the local rabbits and deer do not like to nibble on the beautiful ostrich fern.
(Editor’s Note: Ginny Rosenkranz is a commercial horticulture specialist with the University of Maryland Extension.)

Tulips a candidate for containers