Bought a new tree? What now?

There are a few things husbands don’t like to hear.
Well, maybe more than few, but some — “I got it on sale!”, “Look what I rescued!” and “Honey, where’s a big shovel?” can really mean an improvement to the landscape when you stroll in with some trees and ornamentals from an end-of-season garden store sale.
You may have been hesitant to score a great deal on trees or shrubs at an “end-of-season sale,” because, after all, it says, “end of season,” but that does not mean the planting window has passed.
What that phrase is most referring to is the plant store’s shift to its next season. 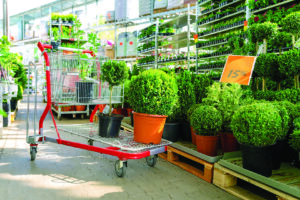 Whether it’s a large home center store or your neighborhood nursery, to prepare for the spring shopping season, stores order large amounts of trees and shrubs, as traditionally that’s when people are eager to start sprucing up their yards.
More often than not, they end up with extra and as the summer drags on and inventory is left, the stores don’t want to or can’t care for them through the winter to sell them during the next spring season and would rather liquidate them to make space for fall and winter holiday décor.
Many times, the left behind trees are just fine, but make sure they’ve had enough general care.
Look for signs it has continued to be watered and kept in the proper amount of sun or shade.
Signs of under-watered trees include wilted or curling leaves that may turn brown at the tips or edge; a sparse canopy of off-color and undersized leaves, leaf scorch or yellowing leaves and untimely fall color and early leaf drop.
Another big factor of taking a fall planting gamble is the type of tree, deciduous or conifer.
Deciduous trees, the category that maple, many oaks, elms, beech, aspen and birch all fall into, would make a slightly better bargain buy than conifer varieties.
For deciduous trees, being planted in the fall gives them a nice time to coast into it’s new lifestyle at your home as they shed their leaves in the fall and go dormant anyway in the colder months.
This means they will have more adequate time to focus on establishing strong roots without having to also spend energy growing leaves as they would if being newly planted in the spring and also dealing with impending hot summer weather and scarce rain.
Conifers, which includes evergreens and the like, are, well, green in the winter, keeping their leaves rather than going dormant.
You can still make out well with these but may want to consider skipping if it’s getting close to the brink of frozen ground weather.
Frozen ground makes it difficult for roots to take in the abundant water they need to thrive and may lead you to have dead needles and leaves in the spring.
A good window of time to allow is about four to six weeks before the ground should freeze.
Another point if you feel strange breaking the mold and planting in late summer and fall is in Maryland, sometimes you can’t win either way.
Our first frost here on the Eastern Shore will likely be in late October around Halloween, though there’s also been years where the kids can still swim outside leading up to trick or treating.
Conversely, we could have late frost after Easter or a few scorching hot days that would also mess with your unacclimated plant.
If you decide to go for it, follow the same best practices you would anytime you would plant a new tree.
Since it has been container bound for longer than it was intended to be, after removing it from the plastic pot, loosen up the roots as they’ve probably become tightly bound.
Digging a hole wider but not deeper than your root ball will also help prime the soil for the roots to grow and take hold.
The days will likely get cooler faster, but the ground still stays warm for a while after temperatures cool.
To trap in even more of that warmth and moisture, don’t miss tucking your new tree in with a few inches of mulch.
If your tree needs to be staked, do so when you plant, before the ground freezes and before winter storms start to blow it around.
You also want to make sure you water it generously everyday for the first few weeks and twice a week after that until it becomes more established.
Just because it won’t be scorching hot sun doesn’t mean your tree won’t need a drink.
While other people are picking out pumpkins when late September rolls around, you can be pulling into end of season sales and picking out some trees to build and up and beautify your yard’s landscape — with some extra savings to spend on a pumpkin spice latte.

Tilghman Islanders have pick of crop