Phlox offers a little bit of everything 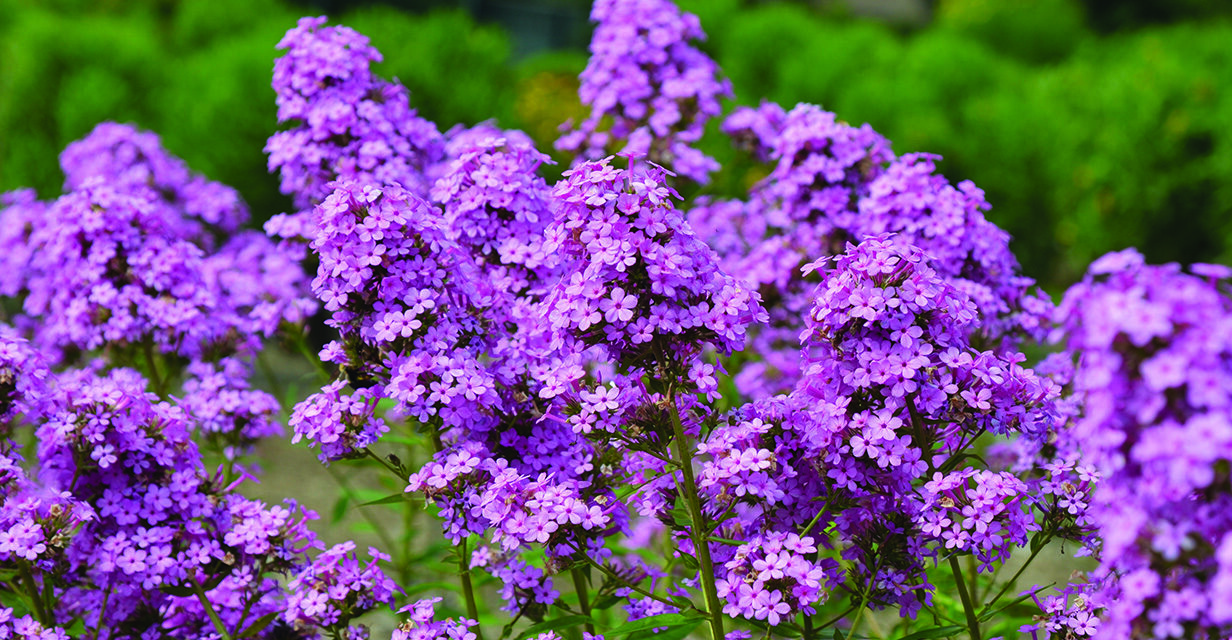 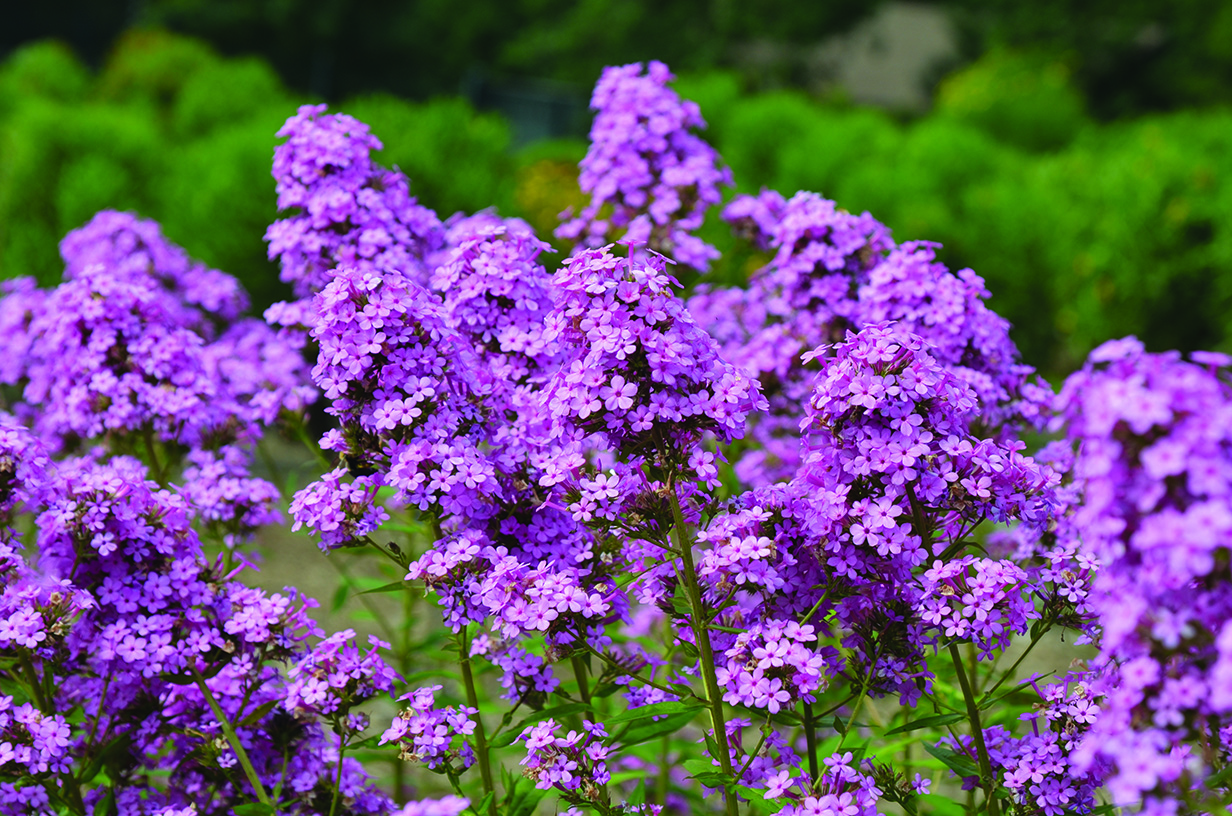 Above, Phlox paniculata ‘Jeana’ ranked first in both powdery mildew resistance and number of pollinator visits during the Mt. Cuba Center’s three year research project on phlox varieties. Phlox paniculata “Shortwood,” below,’ grows to about 4.5 feet tall and has a bloom period from late July through September. (Photo courtesy Mt. Cuba Center)

At the turn of the 20th century, phlox was a mainstay in most gardens for its numerous varieties, soft colors and versatility.
Its popularity faded after World War II as perennial gardens became viewed by many as too old-fashioned but has since made a comeback with attributes of attracting pollinators, summer blooming and easy maintenance.
Within the phlox genus, there are low plants for ground cover, tall plants for borders and foundation plantings, shade lovers and sun lovers.
“Because they have showy flowers and have such a wide range of habitat choices, you are bound to have one or more spots in your garden that would be just perfect for phlox,” said Larry Hurley, horticulturist at Behnke Nurseries, in its gardening blog. “They come in all flower colors, and the flower shape makes them attractive to hummingbirds and the also quite cool hummingbird moths.”
The two most common phlox species are subulata and paniculata.
P. subulate, or creeping phlox or moss phlox is a ground cover type plant best planted in full sun and reaching only about a foot tall.
It blooms in May in colors of pink, purple and white.
P. paniculata, also called tall garden phlox or summer phlox, is a summer bloomer, and depending on the cultivar, can grow up to 5 feet.
It requires full sun and good air circulation.
It will bloom in June through July, and some varieties keep blooming through September.
Both subulata and paniculata, like most phlox varieties, need well-drained soil and need regular watering but the list of phlox choices doesn’t stop there, as there are more than 800 cultivars to choose from.
With its versatility, phlox often isn’t the garden’s star but still a key player in the show.
“A great show, but a relatively quiet show: for the most part, phlox colors are soft colors, old-fashioned colors,” writes Jim McKenney, a Montgomery County Master Gardener and blogger. “The colors are mostly harmonious and lend themselves to mass plantings. And, most of them are softly fragrant.”
And like every great garden plant, phlox has a weakness, especially on the hot and humid Eastern Shore: powdery mildew.
“This is a disease that will cover the leaves with a white film,” according to Mary Ann Ryan Penn State Extension Master Gardener Coordinator in Adams County, bordering Maryland. “A very common problem for garden phlox, when the plant does not get enough sun or good air circulation, the disease will begin to spread. On the upside, this mildew does not kill the plant, and with the right garden design, the foliage of the infected phlox can be hidden with plants in front of them.”
During three years of observation and research trials, the Mt. Cuba Center in Hockessin, Del., zeroed in on the plant problem to determine which varieties would survive the best in Mid-Atlantic conditions.
“We wanted to test the plants’ resistance to powdery mildew, especially cultivars from European breeding programs,” Coombs said. “There are different disease pressures in Europe, so cultivars advertised as disease-resistant may not live up to that description.”
The Trial Garden at Mt. Cuba Center evaluates native plants and their related cultivars for their horticultural and ecological value.
The goal of this research is to provide gardeners and the horticultural industry with information about superior plants for the Mid-Atlantic region.
Coombs found the top-performing cultivars almost all came from U.S. cultivation, or were selections found in the wild.
The top performer, Phlox paniculata “Jeana,” was discovered growing on a riverside in Nashville, Tenn., and named after Jeana Prewitt who discovered it.
“Jeana” has lots and lots of flowers giving a huge display of color,” Ryan said. “Mildew resistant for sure, she looks great in the rear of any border, creating a backdrop acquired by few.” Ryan added, from her experience, the variety ‘Robert Poore’ also is good at guarding against mildew. While the plant was brought into cultivation for its strong resistance to powdery mildew, observers discovered it is highly attractive to butterflies.
“’Jeana” was far and away the most popular for butterflies, especially eastern tiger swallowtails,” Coombs said. “We did some studies to determine why that might be, and we found that its nectar is no different from other Phlox.”
Mt. Cuba Center’s researchers used a team of volunteers to perform citizen science — called the Pollinator Watch Team.
The team of 15 volunteers conducted weekly observations of each plant in the trial to count the numbers of pollinators.
Over the two-year observation period, they reported 539 butterfly visits to Phlox paniculata “Jeana.”
Other top-performing Phlox cultivars in the trial include: Phlox paniculata “Glamour Girl,” P. paniculata “Delta Snow,” Phlox x arendsii “Babyface,” P. paniculata “Lavelle,” P. paniculata “Robert Poore,” P. paniculata “Dick Weaver” and P. panicualta “David.”
If your phlox plants are infected with mildew, you have some options. A fungicide spray, applied according to its label, can be used in major cases.
Organic and non-organic fungicides for mildew on phlox exist.
Another option is to cut back the plants removing the infected foliage. Ryan said chances are the new foliage will be mildew-free.
Horticultural oil can be used as a preventative, and to contain the spread of the fungus by smothering it, according to Perennial Pleasures Nursery which holds a two-week “Phlox Fest” in Vermont.
The nursery also lists a 10-percent milk solution in water as another option that should be sprayed weekly and a baking soda solution: Mix one tablespoon plus a half-teaspoon of liquid soap in one gallon of water, also applied weekly.
“Siting this plant becomes critical if trying to avoid mildew,” Ryan said. “Good air circulation is key. Be sure not to crowd the phlox with lots of other plants around it, although planting some things in the foreground to hide potential mildew issues is a good idea. Mildew of phlox is different than mildews of other plants, so no need to worry about this mildew spreading to other types of plants.”

Trotting along with Tanglao Carriage

How smart is your home?