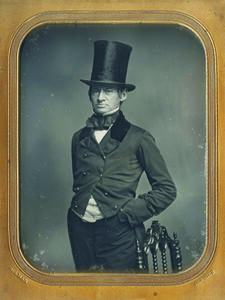 Daguerreotypes were usually portraits, or seated individuals, due to the fact that the process time to take a photo with antique cameras lasted at least 10 minutes or more.

When you look at a photograph or take one yourself, you probably don’t stop to think about the history and processes that occurred to make those images possible.
The daguerreotype was the first widely available way to process a photo, and had very technical, scientific and creative challenges to bring photography to the world.
The daguerreotype process for photography was invented by Louis-Jacques-Mande Daguerre in 1939. He was a French photographer and inventor, whose creation was utilized widely by the public in the 1840s and ’50s.
The world of the early Renaissance had only ever known paintings to capture images, but the use of the camera obscura, a crude camera of sorts, pinpointing light and visual effects through a box, and was one of the world’s first ways of rendering artistic works with a more realistic flare.
It created a three-dimensional world and aided in early paintings, perspective and realism.
Early scientists also experimented with mercury, silver nitrate and other chemicals that reacted to exposure of light, thus forming the first concepts of photography, and the daguerreotype.
Daguerre experimented with photo-sensitive salts, chemicals and cameras, exposing latent images on silver plated copper sheets, that were polished to a high shine.
The process was perfected to capture some of the world’s first images.
The process was a complicated play on invention, utilizing testing with mercury vapors, light sensitivity, and chemical treatments.
Early exposure processes and techniques rendered the earliest daguerreotypes rather unreliable and amateur in nature, in comparison to today’s standards of photography.
The images had dark areas, bare silver areas where the chemicals didn’t treat the surface, damage if the delicate plating was touched or cleaned, and tarnishing, which all added to delicate, early photography. When people collect daguerreotypes in the antiques world, they look for a few things.
Daguerreotypes were always sandwiched between glass.
The photo-sensitive chemicals and delicate nature of the latent image upon the copper sheet subjected the image to a high probability of damage, so the top layer of glass was utilized to protect the image for longevity.
Daguerreotypes were usually portraits, or seated individuals, due to the fact that the process time to take a photo with antique cameras lasted at least 10 minutes or more, depending upon the sunlight and manner in which the seated individual or group behaved.
Movement of any kind was not good for early photography.
If an object moved when the camera was exposing the image, the object would appear invisible.
This was due to the fact that the long exposure times didn’t and couldn’t process the fast speed of movement.
Early pictures of Paris streets, for example, would only show the buildings and not the moving people, horses or other items in motion.
Improvements were made to early daguerreotypes, and by the 1860s, they were replaced with more modern ideas and improvements about processing time.
Chemical processes and exposure times were vastly improved, going from 10-15 minute exposure times to a few seconds, and putting pictures on tintype plates instead of polished copper.
Lenses were also improved, thus making photos of that early era more clear and recognizable.
Daguerreotypes did not last long in a world driven to improve upon the original, but it had a lasting influence as the world’s earliest invention of capturing an image.
(Editor’s note: DeeDee Wood is the owner of Black Cat Curiosities, an online antiques research and sales venue.)