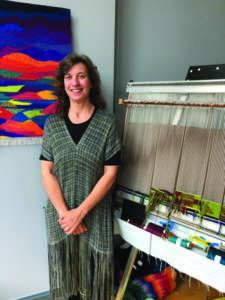 Michelle Follett refers to her relatively new shop, in downtown Cambridge, as a “destination for the serious and the curious.”
Those already involved in weaving and textile arts are summoned into Michelle Follett’s Textile Teachings with beautiful fiber of every color and a carefully curated selection of looms and weaving accessories.
Those who haven’t thought about weaving since making 78 potholders when they were kids will be mesmerized by the shuttle going back and forth and start to get a thought, like maybe I could do this!
As having a loom being a requirement for textile creation, you aren’t likely to stumble upon it as you would someone crocheting waiting for sports practices or the more widespread quilting circles. It’s more of a see-it-and-be-lured-in thing, whether it’s a demonstration at a festival or a shop like Follett’s.
Follett said she found the hobby-turned-passion by stopping into a shop herself in Illinois.
Working in quality assurance for a software company that saw huge growth, she said her career strengths in that field translated to textile weaving when it came to troubleshooting and working with variables that can arise.
Bringing a degree in education with her when she and her husband retired to the Eastern Shore, she said she set out to launch a business where she could find or create more weavers like herself.
For those starting out or just looking for something different to do, her shop offers a “sit and weave” option that is available by the hour or the day.
The intimidating steps of dressing the loom are done for you so you can do the fun part of playing with color and texture.
Follett said it’s a great chance to test the waters by creating a small starter project like a wall hanging or if you sign on for a day, a table runner or scarf.
This assures that you like the “fun part” of weaving before you tackle the nitty gritty of set up, she added.
Moving past “sit and weave” is a beginner class where Follett helps learners delve a little deeper, going over the background of the craft, helping you design a plan for a piece and schedule studio time, usually in chunks of time unless travel distance is an issue.
For those experienced in weaving wanting to expand or try a new to them technique like overshot (which dates back to before colonial times), Follett can help students master that as well. Going back to her quality assurance roots, she also added a “Hand Weaver’s Help Desk,” a one-on-one resource for those needing help such as setting up their loom, correcting a mistake or any other question that can arise.
Follett’s classes start at a suggested age of 7 when a child’s hand-eye coordination are developed and depth perception is improved. Currently, she said her youngest student is 9 years old, having come in after starting with a children’s loom and having now completed three more projects.
Regardless of age, however, the process isn’t for those seeking immediate gratification, Follett said, but added her younger students seem to really get a kick out of it, staying occupied for hours on end.
She noted a family popped in by chance and their very active son was instantly drawn to weaving.
After making their rounds downtown, they popped back in to grab a loom.
For now, the shop is keeping regular business hours, but Follett said she has switched her classes to one-on-one and holds small group bookings in lieu of open classes, a structure that has a perk of added flexibility, she said.
While going virtual with her weaving classes is unlikely as she feels it can be difficult to show the tactile nature of tension and other nuances, particularly for new weavers, she gladly shares recommendations for the best on-line teachers, which include Rebecca Mezoff for tapestry weaving and Jane Stafford for multi-shaft weaving, for those not able to learn from her face-to-face.
As with any hobby, once you become entangled in it, there is some investment as many students do go on to purchase their own loom.
Though Follett does have her own “loom room” for her larger loom, don’t be deterred — you won’t have to kick your husband out of the den or garage just yet!
While there are larger and expensive looms, there are also many smaller sized and affordable looms.
A rigid heddle loom can be a good beginner’s bet, but Follett is able to help you shop for both your size and budget to get you going at home.
So is weaving a social craft you can do with friends? Well, it is and it isn’t.
When you are setting up your loom or doing an advanced project, concentration truly is key. Follett said setting up an easier project on a small Ashford “Katie” loom, using a more forgiving fiber is a good way to go.
And for those without Follett’s experience, a fiber arts circle will give you plenty to gab about, whether deciding on a project or which pattern to weave or color theory.
As a teacher, Follett said she’s still learning, too.
After 15 years of honing her skills, she applied to obtain her master’s weaver certification through Olds College in Alberta, Canada. Already achieving her “Artisan Weaver” certification, she will now start her fifth and final year in Spring 2021 to become a “Master Weaver.” 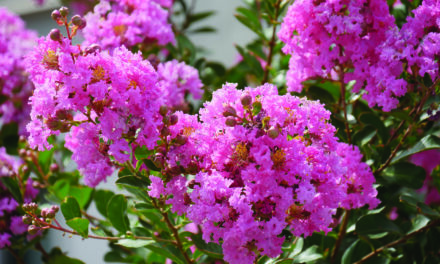 Sweet potatoes step up to plate