A sailor’s valentine is something called “shellcraft” and was made for purely sentimental reasons. They could be made in one case with intricate designs of shells, designed in intricate patterns, spelling out mottos, words or themes, or they could also be double cases, held together by hinges, so that the “valentine” could be opened, just like a valentine card.

Sailor’s valentines were shells arranged in intricate, symmetrical designs, encased in glass cases, hinged in the middle, so when you opened them, it was a sort of “valentine” made of shells.
They were marketed to sailors as gifts to bring home after long voyages in the service to the sea, to loved ones who were awaiting their arrival from the journey.
The name of the item implies that sailors made these shellcraft boxes themselves.
However, most of them were made and sold to sailors, a large number of these objects being made in Barbados, which was a large seaport to sailors during the period the valentines were most popular, 1830 to 1890.
Research into the boxes of shellcraft suggests that the women of Barados made the valentines using local materials and shells, although sometimes they would import items needed from areas of the world such as Indonesia.
Some valentines that are deconstructed have newspapers backing them from Barados, further supporting the story that many were made and sold in that area.
The idea of an encased glass case with shell mosaics was initially developed by a few seaman wanting to bring home a special gift to loved ones, but two Englishmen, George and B.H. Belgrave, changed all of that.
Entrepeneurs in their own right, they recognized that seaport shops could make money in Barbados using the local shells and design, and capitalized on selling sailors these souvenirs, upon seeing them and their beauty.
It soon developed into a very big business for the tourist trade of the mid 1800s for the craft men from Britain, who invested in love and local products.
A sailor’s valentine is something called “shellcraft” and was made for purely sentimental reasons.
They could be made in one case with intricate designs of shells, designed in intricate patterns, spelling out mottos, words or themes.
Or they could also be double cases, held together by hinges, so that the “valentine” could be opened, just like a traditional Valentine’s Day card.
Patterns often featured a central focus point, such as a heart design, compass rose or sentimental messages or mottos.
Many varieties, sizes and shapes of shells were used, in a mosaic pattern of form and shape that created fascinating worlds under glass.
Valentines were typically octagons in shape, contained a glass covering, and ranged in size from 10-20 inches in width.
In the antique world, sailor’s valentines are very collectible because they are intricate, unusual, and beautiful.
The theme of romanticism and mystic also help give the antique a mystery about them.
Shell kits and pattern instructions are also sold at craft shops — and there are many fake sailor’s valentines out in the world that are not truly old, and not from that 1830-90 time period.
Love and romanticism of the sea and lonely sailors makes them a popular and lucrative item for collection to this day in the antiques world of trade.
(Editor’s note: DeeDee Wood is the store manager at Tharpe Antiques, in Easton, part of the Talbot Historical Society.) 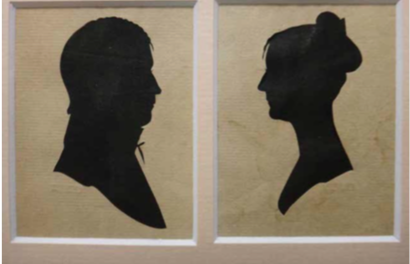