In pursuit of the hot pepper 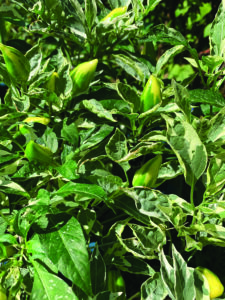 With quarantine spring underway last April, I agreed to grow a pandemic garden with some neighbors.
Taking a poll of preferred vegetables to sow, I prepared to hear the old standbys requested: tomatoes, lettuce, squash, carrots, cabbage, beets. But a transplanted Nova Scotia native threw me a curve.
“I love hot peppers,” he piped up. “Jalapeños?” I asked, groping to name at least one.
“They’re good, but how about habaneros? The hotter the better, actually,” he added.
On hearing that hot peppers had made it to our harvest wish list, a second grower’s face lit up.
Raised in Philadelphia, I confess to consuming far tamer fare—cheesesteaks and such, sans scorching veggies. But now I was on a mission to know and grow the searing foodstuff cherished by my cohorts and the growing legions known as “chiliheads.”
Hot peppers are ranked according to the Scoville Scale. Publisher Matt Bray of Pepper Scale (www.pepperscale.com, with over half a million readers monthly), filled me in:
“Wilber Scoville, a pharmacist by trade (working for Parke-Davis Pharmaceutical Company at the time), created a simple way to measure the pungency of a hot pepper,” Bray said. “The Scoville Organoleptic Test is based on dilution of ground up hot chili peppers. It answers the question: ‘How many equal parts of sugar water do I need to add to a same-sized part of ground chili pepper until I taste no discernible heat at all?”’
While taste panels originally helped determine rating, now high-performance liquid chromatography measures the chemical capsaicin in chili powder. But in deference to Scoville’s landmark contribution, the technologically acquired readouts are respectfully converted back into a similar unit.
“The simplest way to think of the science is about one part of the chemical capsaicin per 1 million equals around 15 total Scoville units,” Bray added.
Food Blogger Isabel Orozco-Moore shared Scoville ratings of some hot peppers used in cooking:
Ghost pepper (800,000 to 1,001,300 SHU); Habanero (150,000 to 575,000); Thai chili (50,000 to 100,000); Chile de Arbol (15,000 to 65,000); Cayenne (30,000 to 50,000); Serrano (8,000 to 22,000); Jalapeno (2,500 to 8,000); Poblano (1,000 to 2,000); and Anaheim (500 to 1,000).
According to Pepperhead.com, the Carolina Reaper (2,200,000 SHU) is ranked hottest and Bray’s taste buds concurred.
“It’s about as hot as it gets. Insane heat!” he said. “Super-hots are incredible hot sauce peppers, but it takes an iron will (and stomach) to eat them fresh. My sweet spot is a habanero-level of heat. Habaneros, scotch bonnets, and datil peppers all just make me smile.
The mildest (if you rule out zero-heat options): Banana peppers and Shishitos. Though, the Shishito pepper can sometimes punch out of its weight class. One out of 10 or so can provide a surprising burst of spiciness.”
In fact, these subtle flavor nuances intrigue Bray the most. He compares them to grape varietals which give different wines their unique characteristics. “I’m a sucker for datil peppers, a perfect mix of heat (habanero-like) and flavor (sweet, tropical).” He also appreciates the pepper’s identification with and passionate local following for over a century in St. Augustine, Fla.
A regional pepper from our area boasts a compelling backstory as well. Adam Moyer, a volunteer with Pop! Farm, a community garden in the Poppleton area of Southwest Baltimore, whose members grow habaneros for Bronx-based Small Axe Pepper’s Habanero Ginger Hot Sauce, explained:
“One of the favorite peppers grown at the garden is the fish pepper, an African American heirloom with a rich Maryland history. It grows on a green and white variegated plant and the peppers begin white, turning to green, and finally red. Its unique coloration allowed it to be a secret source of heat in sauces prepared by Black chefs in crab and oyster houses throughout the Mid-Atlantic. The pepper nearly disappeared in the mid-20th century but experienced a resurgence recently.”
With a little more to go on, I was eager to undertake this pursuit of hot pepper plant prospects.
Undeterred by the catalog seed order backlog, I began searching for local transplant sources.
A friend had recently acquired heirloom tomato plants from a local organic growing guru, Jena Paice, who operates Spirit Grower in Talbot County. I checked out her webpage, www.spiritgrower.com, where the diabolically named “Satan’s Kiss” caught my eye, but it had already sold out!
Unwilling to admit defeat, I decided to order whatever I found available online and hope for the best. But as our agronomic clock ticked on with no delivery date in sight, I masked up and made the socially distanced rounds of local hardware stores and garden centers. Sure enough, I hit pay dirt with habanero, jalapeno, and even ghost pepper transplants! I eagerly got them into the ground, then set out to do some retroactive research.
From the University of Maryland Extension, I learned that hot peppers, like sweet and bell, are warm weather friendly and best harvested before chilly weather hits. With the hottest temperatures still ahead, I figured we were safe.
Of course, just after planting, the long-awaited seeds arrived, so I found another sunny spot, furrowed out a row, watered, and waited. Not a single sprout appeared.
The transplants fared no better. Just as the habaneros seemed ready to set fruit, one completely frazzled, despite increased watering and relocating, another sat seemingly dormant.
The ghost pepper plant grew robust leaves but not even an inkling of a flower.
Finally, my gardener’s instinct to stay hopeful paid off when several tiny green box-shaped habaneros appeared at last.
With each passing August day, they transformed from green to yellow, then orange. Rob, our resident Canadian, sampled several while still green and in the early “heat” stage, and pronounced them “awesome.” I eagerly await his verdict once the peppers turn red.
While still on the squeamish side when it comes to tasting, I’m hooked on trying my hand again at growing habaneros, ghost peppers, jalapenos, and hopefully Satan’s Kiss next year.
But I plan to get my order in early.